Fire at an OVH Data Center in Europe takes down thousands of sites, including WP Rocket and Imagify, and other Websites.

OVHcloud’s SBG2 data center in Strasbourg has been destroyed by a fire which also damaged SBG1. No one was hurt in the fire, but all four data centers on the site will be closed today.

OVH Datacenter in Europe was engulfed in flames, taking down thousands of sites and businesses including popular plugins WP Rocket and Imagify. A multitude of businesses is tweeting updates to their clients.

A fire engulfed an OVH cloud data center that is located in Strasbourg, France. The fire was initially reported to be uncontrolled but was subsequently controlled by firefighters, who remained on the scene to make sure the building cools down.

The fire broke out just after midnight, on Wednesday morning, and took six hours to bring under control, with more than 100 firefighters at the scene. The five-story, 500 sq m SBG2 data center was destroyed, while SBG1 was seriously damaged. SBG3 and SBG4 were protected by the firefighters. The site is currently off-limits on Wednesday morning, and none of the data centers on the site will restart today, according to OVHcloud founder Octave Klaba.

OVH tweeted that while the fire is over, firefighters remain on the scene cooling down the building. They also tweeted that many of the servers will not be restarted soon.

Popular WordPress plugin WP Rocket tweeted that their website is down.

Imagify, with over 400,000 users also experienced downtime because of the fire. Their website was down.

Many sites are reporting having lost their web presence, with one gaming site anticipating major data loss: 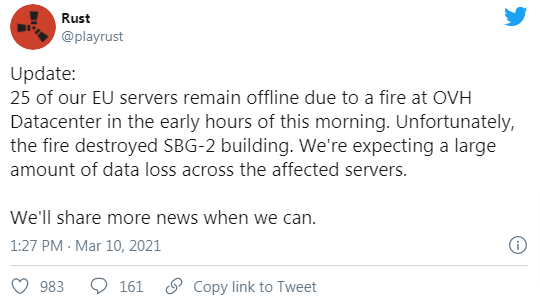 Those who did not back up their data may find themselves in a difficult position. It’s unclear at this time if OVH will be able to restore the data lost on the cloud servers. So, If you do not have complete backup solutions then you will be the next…You must get managed backup solutions from the best hosting services providers.

Cantech India is providing the best hosting services as well as great Acronis cloud backup solutions. Acronis is a complete solution for your websites and directories backup and restoration. It is user-friendly so you can plan customize backup and restore schedules for each and every file & folder. Acronis has a very simple and easy-to-capture management panel. Even our technical support team is always there for you if you stuck anywhere.

Sites that do have a backup should be able to change their DNS to point at another server and upload a new site immediately. But it can take several days for the new DNS settings to propagate.